Stefanie Sun won Favourite Artist (Singapore) at the MTV Asia Awards on Aug 2. She chose a dress out of Burberry’s A/W collection, causing her to shine amongst the other celebs who stuck to blacks and whites.

Here’s the dress on the runway: 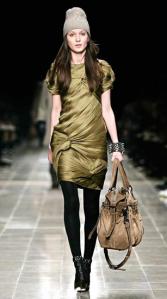 And here’s Stefanie Sun in Burberry: 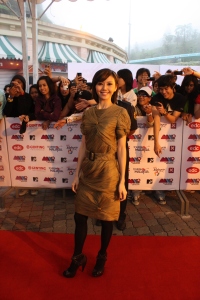 If you’re trying to spot the differences between the two pictures…. (I admit I did that too!) Anyway, here’s more about the tied silk organza dress.

Side note: While flipping through Her World’s Aug issue, I spotted the Ed – Elisabeth Gwee, pictured in the same Burberry dress as Stef! Complete with the belt Stef wore. (If you noticed, the runway version does not include the belt.) It’s on Page 60 of Her World. Tried scanning it though!