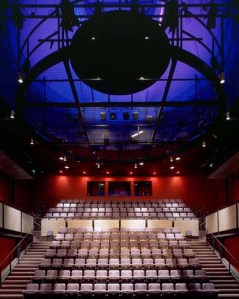 Ad Lib: Any lines or actions improvised by the actor.

Backstage: The whole area behind the stage, including wings, dressing rooms, control booths and green room.

Blocking: Refers to the precise movement and positioning of actors on a stage, usually pre-determined by the director during rehearsal, telling actors where they should move for the proper dramatic effect and to ensure sight lines for the audience. The stage manager takes note of the stage directions using the terms below. (see image)

Call: The warning a stage manager gives to the actors about the exact amount of time left before the curtain rises. The most common call times are half-hour, fifteen minutes, five minutes, and places.

Collective Creation: The process by which theatre artists work together as a group to create a play. The group may be made up exclusively of actors, or it may also include a director, playwright and designers.

Corpse: Theatre slang. To “corpse” for an actor means to lose control onstage during a performance or a run-through and laugh uncontrollably. It is often contagious among actors onstage. This is considered unprofessional conduct!

Cue Light: A light that when turned on warns a crew or cast member to perform a cue or to make an entrance. The light going out signals “go.”