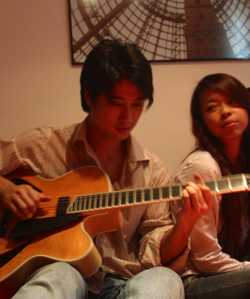 It’s Day 3 of Timbre Fest! Be sure to check out Reverie, Tony, Terry, Spencer and the Vernon Cornelius band at Timbre tonight. In the meantime, ArtZine chats with Sara Wee, who will be performing at the Timbre MusicFest on Sept 27 at midnight.

ArtZine: Summarise your type of music in one sentence.
Sara: Jazz. Sorry, did you say one sentence?

ArtZine: You’re on vocals for 53A as well! How is it like performing on your own?
Sara: Alvin (pictured above) is my constant partner-in-crime, we’ve been working together for 5 years, so it’s like missing a limb. But I do enjoy doing gigs with other musicians once in a while, it gives me an opportunity to explore different styles and sounds.

ArtZine: Who introduced you to jazz?
Sara: Can I say me? I sort of discovered it on my own, starting out with Laura Fygi and Silje Negaard.

ArtZine: What is the wackiest thing you would ever do for your fans?
Sara: Nothing, Singaporeans are too sane.

ArtZine: But if you could do anything onstage, what would you do?
Sara: Make the musicians dance around me in a cult-like circle.

Are Singaporeans willing to listen to originals?

How well do you know Sara?

– She makes killer fudge brownies.
– She has two cats called Joe and Rat.
– She’s allergic to coffee!
– Her wardrobe is arranged according to colours
– She hates dark chocolate.

Name us the first song that comes to mind!
Airmail Special by Ella Fitzgerald.

And lastly, life without music is…. ?
Boring as hell.