By: Fred Chin from Potential Problem

Arriving at Timbre, we were greeted with soft candles and the pockets of people talking over the tunes played from Vertical Rush’s Of Real Dreams and Plain Sunset’s latest self-titled release. Hearing these played over the speakers while waiting for the ‘live’ performances to begin provided everyone a “preview” of what they were in for, and what they were going to get for their $32 worth.
To me, it was an outdoor experience of good music, overpriced fried food and drinks, and catching up with old friends whom I used to play share the stage with or meet at gigs.

The audience were mostly scene kids from the past, now working adults of all sorts, dressed in nice clothes. Having Vertical Rush and Plain Sunset tonight brought back me back to the old WakeMeUpMusic days, when the gigs were not infested with wannabe emo-bands. My table of overpriced beer (three bottles of Heineken for $44? Why?) and overpriced finger food did not help to alleviate the festered humidity levels at the open-air concept of Timbre, but fortunately the excellent sound quality provided by Jon Hemsley and the amazing music from the bands made it worthwhile. 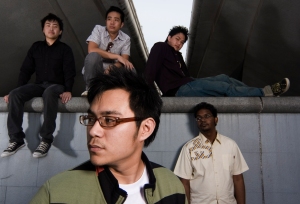 Vertical Rush kicked off their set with an upbeat new song. As described by singer Esmond Wee, the opening song was “so new that it was untitled”. They moved into Your Last Song, a fast in-your-face and explosive song with riffs of guitar bends that definitely caught everyone’s attention. Angels with its atmospheric starting put the whole of Timbre into a dream-like state, before shifting to an upbeat chorus, with the repetitive line “I can see angels around me” in its ending that read indie rock in the way it captured the ending of One Dollar Short’s Another Day Away in its catchiness and Fairweather’s Slow To Standing in its melancholy combined together. Spaceman captured the curiosity of the audience with its palm-muted guitar at its beginning and brought the energy back into the song with its rhythmic release patterns that was sonically pounding.

At the extreme right of the band, keyboardist Shaun Soh gave a running lesson on how to look really into the performance when not playing anything. Beatkeeper Darren Goh, with his signature painful expressions and headswirls proved how consumed he was by the tunes. Esmond Wee’s whispery vocals with Marcus Lim’s extensive guitar effects brought out the mysterious side of the music. Guitar pros, no doubt, they were able to switch to a more intense and harder rocking feel when the choruses needed so. 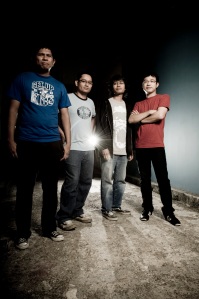 Plain Sunset kicked off their set with Photos of Us, being one of the only two songs that are not from their latest release. My familiarity with that song from having seen them play it so many times reminded me that Plain Sunset is probably the country’s most experienced and active bands to date. They moved on to the new single, Johari Window, with its distinctive echoic drum toms that gave the song a very “big” feel to it like how a ballad would portray. The River Song was no stranger to everyone, thanks to its catchy chorus that anyone could easily sing-along to. Its melody at the start reminds me of Green Day’s Scattered : both bands have been around for a long time, they both started out fast and loud, they both made an album that mellowed down (i.e. Green Day’s Warning in 2000), and they both have changed their sound as a sign of maturity.

The band ended their set (and an eventful Thursday night for everyone) with the song Plain Sunset, a signature of theirs. Throughout every song, they maintained the energy level just like how they were years ago, and they certainly have not lost it. They made performing on stage look so effortless, which is no surprise to everyone. Ronny kept every single beat in place, and Nizam’s jumps at pauses of the songs are still as impressive as ever.

The whole experience watching these two bands showed me how much they have matured over the years. If it weren’t for them, Timbre’s night wouldn’t have been this successful, due to their ridiculous price tags on everything. Even the $32 entrance fee for the public was no exception. Well, at least it brought in the affluent crowd and kept out the undesirables, something which Timbre has always been capable of.