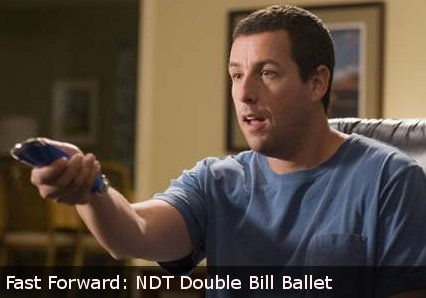 Always wished you could fast-forward through the advertisements on TV and replay the best parts of the movie? Grab our special ArtZine remote as we delve into Double Bill: Silent Screen and Toss of a Dice by the Netherlands Dans Theater (NDT). Some things are better seen in slow-mo…

The spotlight warms onto a highly-synchronised pair. Clad in black, they tick like clockwork, stepping right on cue into a beautiful arabesque with their legs stretched strong. There’s definitely room for error given the proximity they’re dancing in. You stare hard; waiting to catch just a foot that’s a fraction off a landing or a mis-timed arm that was far too slow.

Aha! One of the pair stops abruptly, bringing repetion to a close. Slowly his foot inches forwards as if on slow motion. You didn’t accidentally press the slow-mo button did you? No, it can’t be because the other dancer is still sliding across the stage!

Choreographed by dance couple, Paul Lightfoot and Sol León, this piece is incredibly long. 45 minutes! With a video of a little girl running through a deserted forest is screened in the background, this multimedia-dance pairing is great to watch. In its slow moments, Silent Screen emotes anguish and moans through sign language. The gestural impact in the silent theatre reflects silent horrors and inner pains – hallmarks of Lightfoot and Leon’s style. Inspired by silent movies, prepare yourself for silent wild fits, contortions and agonising twitches. The dancers are incredibly flexible and lean.The profound emotional overtone may be intriguing for some yet overbearing and agonising for others. Should it be called Silent Scream instead of Silent Screen?

Toss of a Dice by NDT

Imagine dancing with the disco ball hung low from the ceiling, barely just an inch above your head. Jiri Kylian’s Toss of a Dice features a great metallic razor-ship sculpture hung from the ceiling, hovering precariously over the dancers. Angular and eye-catching, the dancers almost “gamble” their safety by dancing so close to the dangerously spikes dangling from above. Created by Japanese artist Susumu Shingu, it spins constantly, causing a ringing sound of glass in the air. Reacting to the sculpture were the dancers clad in black who scurried, hurtled and ran from it in razor-like steps. Their synchronicity is remarkable in such a space. Mallarmé’s poem entitled Un coup de dés jamais, from which the ballet gets its name is read over the music.

NDT Double Bill: Silent Screen and Toss of a Dice is part of the Da:ns Festival 2008 by Esplanade. Read about Albert Tiong’s Checkmate here.