ArtZine chats with director Suffian Zainuddin, whose film entitled Tak Dong Cheng has been shortlisted as one of the top favourite films of First Take 2008.

Tak Dong Cheng is a story of 2 Malay friends, Farid and Jas, who are interested to join a lion dance competition. They face many obstacles and difficulties (most of the time to hilarious effect) when learning, but persevere.

Suffian: I have quite a number of wacky friends so they are my inspiration for the characters of Tak Dong Cheng. (TDC)  Though TDC is not based on any real-life events, some of my life experiences and observation of people did influence certain scenes. Korean, French, Malaysian and Indonesian films also inspires me.

Suffian: 4 months to conceptualise the story. The filming itself took 2 months to film. Since everyone has their day jobs, we only shot on weekends. Editing took another month to finish. As for costs, well, I did not keep a record as I am afraid to see the actual figure! Ballpark range is between 1 to 2K.

What were some of the challenges you faced during the production?

Suffian: The weather! We had an outdoor finale shoot and it rained for quite a while. That totally affected the schedule as the actors also had other commitments and that shoot had all the actors in it! Imagine the logistics and organization. During post production, editing was a challenge as we got a wee bit carried away with all the fun. The initial plan was to keep it under 30 minutes so that TDC would qualify for short film festivals. There is a short version but I prefer the full version because every scene is important and crucial to the story.

What was your reaction when you were informed that it was one of the favourite films?

Suffian: I felt relieved that the audience liked the story enough to vote it as a favourite. I want them to enjoy watching TDC as much as me and my friends enjoyed making it.

I want TDC to be remembered for its good-hearted story and well liked characters. I also hope that the audience will go back discussing the messages (yes, believe it or not, serious messages were included in this comedy) conveyed in TDC. The audience should vote for TDC because it deserves the title, the best among the other films for 2008, not because my friends want to make me happy.

If you won, you would?

Suffian: I would tell everyone that I love Substation for giving me the opportunity to showcase TDC! And I might create a little celebration dance in the privacy of my room afterwards. The win gives me added encouragement to make better productions in future. 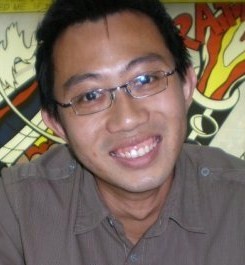 Suffian: Try not to schedule shoots at HDB neighbourhood in the morning. Those karanguni men will be a nightmare to your audio! On a serious note, if filmmaking is your passion and dream, do go all out to achieve it. The journey won’t be smooth but you must not allow obstacles to stop you completing your film for the world to see. Insufficient budget, friends who pull out, bad weather, etc are just minor hiccups. Enjoy the experience and have fun with the friends you meet along the way. And don’t be shy to showcase your works.

“Singaporeans should constantly question our individual actions and way of thinking. Let’s look at ourselves first before we criticise and complain about others. We should be civic minded, understanding, sensitive and show empathy in every situation of our lives. It is tough sometimes but we are only human aren’t we?”

Are you working on any new projects?
Suffian: I am now a member of a facebook group called the Singapore Malay Film Society and am collaborating with various directors and aspiring filmmakers to produce more works as well as exchange ideas and information in the hope of progressing Singapore’s film industry. Also, my friend and I are writing scripts on a romantic comedy and the sequel to TDC. My dream is to release my projects every 9 August. (laughs)