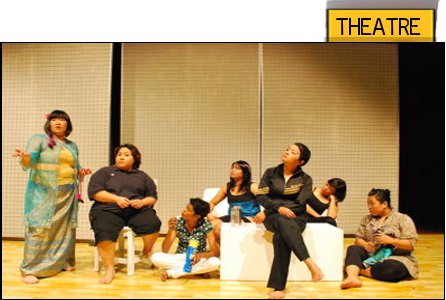 Betrayed Babies is essentially a play about techies acting as actors when none show up for rehearsal, and are of course acted by none other by the techies in Panggung ARTS themselves.

It is funny and light-hearted, spoofing the Sandiwara-style of TV dramas, which so happens to be titled ‘Betrayed Babies’ as well, but says little about what ‘family’ really is.

Me: Could you perhaps elaborate on the title ‘Betrayed Babies’? Why did you decide on this?

Once you get past the melodrama and the spoofs, you also realise that the play is rather bold in the issues it explores, ranging from lesbianism to pre-marital sex to fuck-buddies, together with a whole slew of lies, and deceit. The portrayal of a retarded-girl being the illegitimate offspring of an ‘ulamma’ and everyone dancing in their prayer outfits was perhaps the more memorable moments of the play which bordered on the blasphemous.

Nevertheless, it wasn’t clear if the play’s focus as a whole was on the life of the backstage crew, or the play that they were acting out. Little on what ‘family’ is was probed or discussed. During the post-show dialogue, they merely reflected on how hard acting really was, and the play seemed only like an avenue for personal exploration. The verdict? The majority would rather continue being techies – safe backstage with fewer chances of screwing up.

With the play acted in Singlish and punctuated with Malay and the occasional Chinese, the play has limited appeal beyond our shores, not to mention those who have never known the existence of Suria, and it is unlikely to even stand a chance in conservative Malaysia. While it was perhaps a learning experience and a brave attempt for the techies of panggung ARTS, it was less so for the audience of the half-filled Esplanade Recital Studio. The girls were having fun, but that’s about all there was.

Share with us your views on Art & The Family.

This review is part of ArtZine’s Special Coverage of the M1 Singapore Fringe Festival. Read our reviews of the other festival performances here.