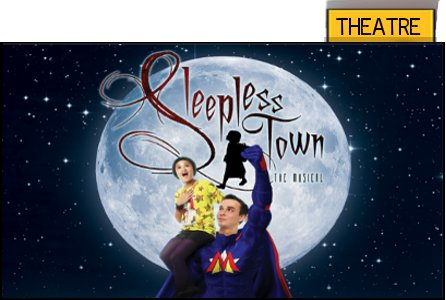 “If you had a superpower, what would it be and what would you do with it?” We posed this question to the cast of Sleepless Town – the musical with atypical heroes and villains.

Elena Wang plays villain Queen Azira in Sleepless Town. In an interview with ArtZine, she confesses that she never really had a favourite superhero. “I was never a superhero or a comic fan. I guess off the top of my head, it’ll be Superman. He led a double life and that was intriguing for me!”

Every villain has a right-hand man or woman. In this musical, its One-Titless, played by Josephine Tan. Jo is well-versed with mangas and promptly picked Japanese character Ranma as her favourite superhero. She explains, “he’s cursed to turn into a girl when he’s splashed with cold water. He’s both a Japanese highschool ruffian (hot) who fights fabulously and a pretty, manipulative girl (can you say Desperate Housewives?). He also never fails to crack me up.”

Unfortunately suave Bruce Wayne (aka Batman) doesn’t make the list of favourite superheroes as Chua Enlai chooses Batman’s side-kick, “Robin. Why? He’s so underrated and ignored that he really needs the votes.” Enlai plays One Ball-less, a master of disguise.

In Sleepless Town, Per Theodor plays Sparrowman, who lives in the shadoes of Flying Fox. Per jokes, “the only similarity between me and Sparrowman is that we both like wearing tight, sequinned underwear!” He votes for Spiderman. “He is so ambiguous, he represents one of the most repulsive insects, yet he is such a nice hero.”

Young Julia Abueva takes the stage as 12 year old Nora Mowend. Julia shares more about her character, “Nora grew up reading comic books and she loves superheroes. Her only way to happiness is when she escapes to a fantasy world called Sleepless Town.” Julia’s favourite is noneother than… “superman because he is the best looking one”.

Andrew Lua plays The Incredible Bulk, a 2nd generation superhero with great physical strength. His favourite superhero? Well, he named two instead of one. “Wolverine for his tenacity and being the epitomy of ‘Manliness’ and Hiro Nakamura for his steadfast belief in being a righteous warrior and his cool ability to control time and space.”

She chose… Superman! He is the ultimate superhero. I grew up watching Christopher Reeve as superman in the movies. I think that childhood nostalgia will never go away?

(That probably explains why husband Mark is pictured in Sleepless Town publicity posters dressed as Superman!) 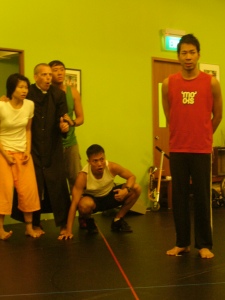 Who wouldn’t want superpowers? The cast dream of the mayh m they could cause if they had their own powers.

Elena: I’ve always wondered what it’d be like to control things from my mind, either objects, time and space or even read minds. [Full Interview here]

Jo: If I had superpowers, I would be a less tortured version of Jean Grey – psychokinetic (meaning I can levitate) and mild mind control. That’s all I need. [Full Interview here]

First, flying – I want avoid all those annoying jams on the CTE, BKE and PIE as well as the outrageous ERP charges. And should I not be able to afford Business Class, flying solo sure beats Economy!

Secondly, invisibility – If I had it, I’d be off to the White House in a jiffy. I want to know what Obama’s got up his sleeve! [Full Interview here]

Julia: I would fly! And I would go wherever I want, anytime, anyplace. I think the best time would be at night then I could be with the stars. [Full Interview here]

Andrew: To be able to control time & space.
Time is forever moving and one can never gain more time, a second is a second or a minute is a minute, nothing more nothing less. To have more time to do stuff, to relive special moments or to fast forward bad times (Like fix the economic crisis or to jump pass it all together)
Teleportation to travel to the many destinations I’ve never been before and it definitely saves time and the effort to travel on a plane with a crying baby. [Full Interview here]

Per : Flying. Then i could fly to rehearsals instead of riding my bike. [Full Interview here]

Beatrice: That i didn’t need to sleep. That way i can have all 24 hours in a day to do more things!! I want to be a sleepless woman! [Full Interview soon]