The brilliant animation speaks for itself. After viewing the production stills from Director Tan Wei Keong, I’m looking forward to watching his short animated film. ArtZine’s giving you the heads up (and an exclusive interview!) as Wei Keong lets us into the secret of Hush Baby, way ahead of its World Premiere at the 22nd Singapore International Film Festival in April.

He recalls, “The idea for Hush Baby was conceived, brainstormed and finalised on a bus ride in 2007. After wrapping up White, a stop-motion animated short film, I was extremely keen in experimental animation.”

Experimenting with mixed media techniques called for the assistance of Loo Zihan, director of Solos (2007). “The making of Hush Baby could be seen in three stages, in order: pixilation, 2D & 3D animation and compositing. The baby character was drawn on frame by frame on paper whilst the rattler was created in 3D. I asked Zihan to assist me with the pixilation process which took two days. It took roughly a month to finish drawing the baby,” he shares.

Through the carefully drawn animation, a curious baby is lured into a world full of temptation. The baby struggles against being trapped and restricted in a small space as the 3-D human hands try to protect the baby from the world. A child’s innocence disappears as dark humour and pure wit takes over, in the name of freedom. 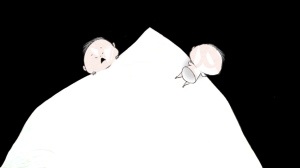 “Since infancy, all of us have been told what is right and wrong; what is acceptable and not. Under this institutionalised, perhaps suppressive, discipline, we exist according to rules and restrictions. ” – Director of Hush Baby, Tan Wei Keong

“The film portrays the interaction between an inquisitive character and a dominant being that, like a parent, means well, but whose concern manifests itself as manipulation. However, life can perhaps be more beautiful beyond the wall of protocol,” Wei Keong muses.

Ensuring that it was a team-effort that enabled the film to be completed, he thanks his friends: animators Vanessa Seow, Henry and Harry Zhuang. “Henry and Harry were in charge of colouring the baby on computer. They were extremely efficient as they took less than a week to finish which consisted of more than a thousand sheets! Vanessa did the delicate sound design for Hush Baby.”

Catch Hush Baby at the Arts House’s Screening Room on: